This wildlife reserve was declared by the BaTawana people in 1963, the first wildlife sanctuary to be created by an African tribe in their own area, and as such is unique. This act was described at the time as a shining mark in African tribal history.

In the late 1800's a Rinderpest epidemic spread through the continent, wiping out a large % of the wildlife and cattle in Africa. As wild animals are the hosts of the Tsetse fly, this led to a natural decrease in the Tsetse fly population in the area. Now it was possible for the movement of cattle into and through the area without the fear of disease. The Batawana tribe feared that continued competition between the returning game and the cattle herds for grazing, and uncontrolled hunting would lead to the destruction of the habitat and a decrease in the game populations. 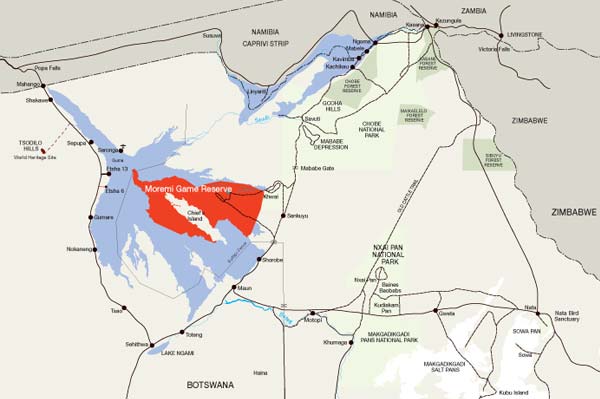 During this time, (late 1950's, early 1960's), the tribe was being governed by Mrs Moremi, the widow of Chief Moremi III, whose son, Matiba, was too young to rule. Thus the Moremi Game Reserve was officially proclaimed on 15 March 1963.

Located on the northeast side of the delta, it is probably the prime tourist destination in Botswana, due to the fact that it encompasses several different types of ecological zones. The total surface area of this reserve is 4 871 square kilometres. This is almost one-third of the Okavango Delta-a fact Botswana can be very proud of. The dryland areas of Moremi consist mainly of Mopane veld (Colophospermum mopane). The giant mopane trees form the canopy woodland and lend an atmosphere unique to this area.

Teeming with bird life and wildlife makes Moremi a prime wildlife area where elephant, hippo, buffalo, lion, and most other game (including eland, kudu, roan antelope, and if you're lucky, even leopard) can be seen in abundance. Bird life (both in the delta and dry land sections) is excellent, especially along the Khwai River. During the dry season a congregation of all species, (bird and wildlife), along permanent rivers and water holes makes Moremi Game Reserve one of the most unforgettable wildlife experiences in Africa!